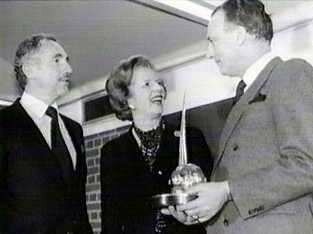 Prime Minister Margaret Thatcher was so taken by the Yes Minister series, that she wrote a sketch herself (together with her Press Secretary Bernard Ingham). In it she played the Prime Minister, Paul Eddington was playing Jim Hacker (Minister of the Department for Administrative Affairs) and Nigel Hawthorne played Sir Humphrey (Permanent Secretary of the Department for Administrative Affairs). It was played on the National Viewers and Listeners Awards 1984. Below is the script of this sketch and some excerpts in RealVideo.

Excerpts from the Thatcher script

SCRIPT:
Prime Minister: Ah, good morning Jim, Sir Humphrey. Do come in and sit down. How's your wife? Is she well?

PM: Good. So pleased. I've been meaning to have a word with you for some time. I've got an idea. 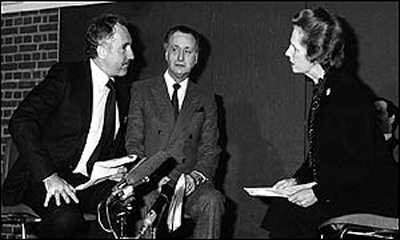 PM: Well, not really an idea. It's gone beyond that actually. I've given it quite a bit of thought and I'm sure you, Jim, are the right man to carry it out. It's got to do with a kind of institution and you are sort of responsible for institutions, aren't you?

JH: [Decisively] Oh yes, institutions fall to me. Most definitely. And you want me to set one up, I suppose?

PM: Set one up? Certainly not. I want you to get rid of one.

JH: [Astonished] Get rid of one, Prime Minister?

PM: Yes. It's all very simple. I want you to abolish economists.

SH: [Silkily] All of them, Prime Minister?

PM: Yes, all of them. They never agree on anything. They just fill the heads of politicians with all sorts of curious notions, like the more you spend, the richer you get.

JH: [Coming around to the idea] I see your point, Prime Minister. Can't have the nation's time wasted on curious notions, can we? No.

PM: Quite right, Jim. Absolute waste of time. Simply got to go.

JH: [Uncertain] Simply got to go?

PM: [Motherly] Yes Jim. Don't worry. If it all goes wrong I shall get the blame. But if it goes right - as it will - then you'll get the credit for redeploying a lot of underused and misapplied resources. Probably get promotion too.

PM: Were, Sir Humphrey. Were.

JH: [Decisively] Yes Humphrey, were. We're going to get rid of them.

PM: Well, its all settled then. I'll look forward to receiving your plan for abolition soon. Tomorrow, shall we say? I'd like you to announce it before it all leaks.

PM: [Firmly] Yes, Sir Humphrey, degree. Your degree. You have one, I take it - most Permanent Secretaries do, or perhaps two?

PM: Congratulations, Sir Humphrey, but what in?

Plot inconsistency: Sir Humphrey has no degrees in politics and economics. From the episode The Greasy Pole we know he has a degree in the Classics from Baillie College, Oxford.