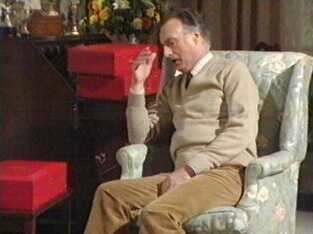 Plot: Jim Hacker is being interviewed by a school girl who asks what he has actually achieved. He realises that he actually has not achieved anything important since he became Minister.
His wife Annie suggests to concentrate on achieving at least one thing while he is Minister. She suggests he should do something about the low number of women in the higher ranks of the Civil Service. Jim Hacker decides to go for this because there is a principle at stake; and principles are excellent vote winners.
The next day at the office he asks Sarah Harrison, an attractive Undersecretary, about the number of women in the Civil Service. He learns that very few women have made it to the top of the Civil Service.
He shares this information with Sir Humphrey and tells him he wants to institute a 25% quota of women, to be achieved in four years time, by attracting women from outside the Civil Service. Sir Humphrey is of course appalled by this idea of getting people from outside the Service for the top 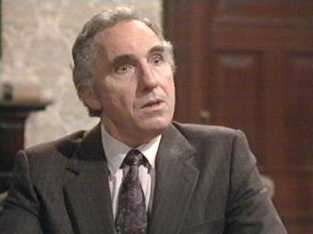 jobs, let alone women. He argues that this policy requires a larger intake of women at the recruitment for junior positions, and after 25 years or so the quota could be met.
Jim Hacker however wants to start right away by mobilizing his Cabinet colleagues on this issue, and by promoting Sarah Harrison to Deputy Secretary within the DAA. Sir Humphrey disagrees with this appointment, since she is the most junior Undersecretary and it is therefore not her turn. Their discussion ends in a stalemate.
Sir Humphrey is a bit worried about his Minister's plan and therefore has a chat with Sir Arnold. Sir Arnold suggest to tell the Minister the unions won't agree to this. Furthermore he will make sure all Permanent Secretaries will persuade their Ministers not to go along with this ridiculous plan.
Back at the office Sir Humphrey tells Jim Hacker the unions will not go along with this quota idea, but this argument is not effective. Jim Hacker realises that Sir Humphrey just wants to drop the whole scheme.
When Annie Hacker arrives at the office, Sir Humphrey has a little chat with her about how 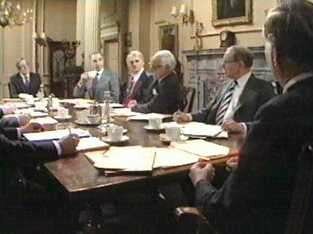 attractive Sarah Harrison is and that Jim will spend much more time with her when she is promoted to Deputy Secretary. This surely makes Annie think twice about this women's quota idea.
At a meeting of all the Permanent Secretaries the quota is discussed. As it turns out everyone fully agrees in principle, but does not see how it could be instigated within their own departments. And this is the same what happens at the Cabinet meeting of all the Ministers; every Minister applauds the principle but then says it would not work in their department.
Jim Hacker is very disappointed by this outcome and he decides to at least appoint Sarah Harrison to Deputy Secretary, even though his wife seems to be against it now. When he tells Sarah about this wonderful promotion, she tells him she was just about to resign from the Civil Service. She explains Jim Hacker that she wants a job that will appreciate her as a person and where she personally can achieve things, and therefore has accepted a job at a merchant bank. She is absolutely not charmed by the fact that she would be part of a 25% quota and does not appreciate being patronized. Jim Hacker is very disappointed and all he can say is: "Women!".
Rating (0-10): 7 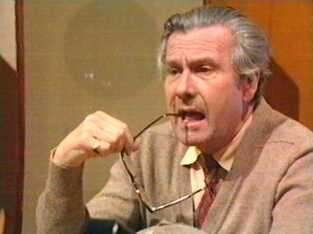 Plot: Jim Hacker has received new responsibilities after the Cabinet reshuffle. He now is also responsible for local government. Straight after the appointment at Number Ten he has a radio interview with Ludovic Kennedy. Ludovic asks Hacker how he will get a grip on local government since his predecessor did not succeed in this, but Hacker remains vague and just repeats that he sees this new job as an enormous challenge.
Sir Arnold has heard the radio interview of Jim Hacker and is worried that this means that Hacker actually wants to do something about reforming local government. At lunch with Sir Humphrey he expresses his concern and orders Humphrey to make sure nothing is done. This is important because every local government reform always leads to a reform in Whitehall as well. He advises Humphrey to let Hacker crack his teeth at Civil Defence (fall-out shelters), because this is not a serious issue. 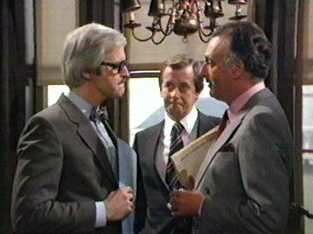 At the department Jim Hacker has a meeting with the Director of Local Administration Statistics Dr. Cartwright, who is now part of the DAA. He presents the Minister with a plan to introduce pre-set failure standards on all local government plans that cost more than 10,000 pounds. Jim Hacker is excited; this will make sure he gets a grip on local government. Sir Humphrey however is not pleased and he recommends the Minister first looks at a real vote-winning issue: Civil Defence. He points out that the London borough of Thames Marsh has spent the least of all boroughs on Civil Defence, and that a Ministerial visit may be a good idea.
Jim Hacker visits Thames Marsh and has quite a bit of publicity success. He points out that the borough has only one fall-out shelter with a place in it reserved for the leader of the council, Mr. Ben Stanley. Sir Arnold is very pleased that Jim Hacker is looking at a non-issue like Civil Defence, but Sir Humphrey tells him that Hacker still wants to introduce the pre-set failure standards plan of Dr. Cartwright. When Sir Humphrey tells him that Hacker has a TV interview on Civil Defence the next day, Sir Arnold gets an idea how to block the plan. 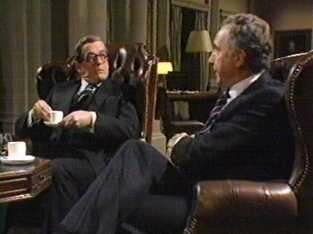 At the TV interview Jim Hacker talks enthusiastically about his victory at Thames Marsh and states that there are more important people like doctors and nurses that need to have places reserved in fall-out shelters. Then Jim Hacker gets in a bit of trouble when Ludovic Kennedy asks if this means that the Prime Minister and the Home Secretary should give up their reserved places. He gets out of it by telling the story of a borough that spent their entire Civil Defence budget for the next three years on a trip looking at fall-out shelters in California.
The next day Jim Hacker tells Sir Humphrey about what happened at the TV interview. Sir Humphrey is "shocked" and informs Hacker that the borough that spent their entire budget on a California trip is in the PM's constituency. The PM's Office was trying to keep the story secret. Jim Hacker orders Sir Humphrey to help him to prevent the interview from being broadcasted. Sir Humphrey however says that he is working very hard on the pre-set failure standards plan, but he can help if this plan is not so urgent. 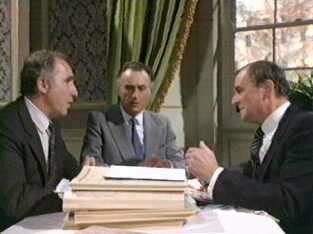 Jim Hacker and Sir Humphrey have lunch with the BBC Director of Policy. The BBC however does not give in to government pressure. Then Sir Humphrey produces a large number of files regarding unfavourable BBC reporting, jokes against the PM, and Minister's programme suggestions not accepted. Sir Humphrey informs the BBC Director that there is a lot of government criticism on the BBC, and questions are asked whether televised Parliament should be entrusted to ITV, and whether a Select Committee should scrutinize BBC expenditures. The BBC Director gets very nervous. Then Sir Humphrey tells him that the TV interview contained factual errors, out of date material and some security issues. The BBC Director now agrees that broadcasting is not in the public interest but he must point out that the BBC does not give in to government pressure.
At the department Sir Humphrey brings Jim Hacker the happy news that the BBC decided not to broadcast his TV interview. Jim Hacker tells Sir Humphrey to hold of the pre-set failure standards plan for now. Sir Humphrey fully agrees.
Rating (0-10): 8 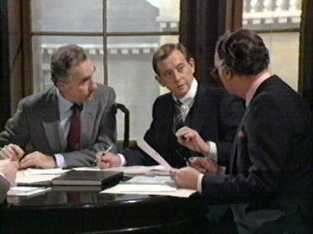 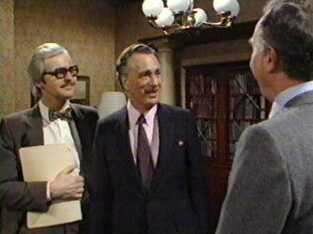 the Minister cannot have private conversations, because everything has to be always minuted to make sure he knows what is going on. Jim Hacker now announces that he does not want to discipline South Derbyshire. Sir Humphrey however points out that the Minister has no choice, it is the law.
Next Alex Andrews from the Daily Mail comes to see Jim. He tells Jim about a story the Mail has uncovered that the government is giving away forty million pounds of equipment to a private developer. Due to an error by an official in the early 1950's, a Scottish island with military installations is now handed back to the original owner. Alex Andrews wants to make sure that the files that will be released shortly will be complete, because the Mail wants to find out who was responsible. That official could now for instance be a Permanent Secretary, responsible for spending billions of pounds of public money. Jim Hacker gives Alex the assurance that the complete file will be available. Alex Andrews points out that otherwise Jim Hacker will suffer severe negative publicity.
The next day, Sir Humphrey sees the article in the Daily Mail on the Scottish island scandal. His face all of sudden turns white. When at the DAA Jim Hacker tells him about the investigation the Mail is planning to find out who is responsible, Sir Humphrey is in a complete state of panic. He tries to convince Jim Hacker that releasing the files has security implications, but Jim Hacker is not convinced; the Mail can inspect the files as soon as they are publicly available. 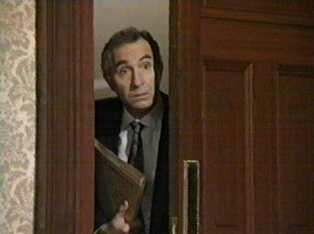 Jim cannot help wondering why Sir Humphrey is so anxious. Suddenly he begins to suspect who the responsible official for the Scottish island scandal is. Bernard finds out that in the 1950's Sir Humphrey was Assistant Principal at the Scottish Office, on secondment from the War Office as a Regional Contracts Officer. Jim Hacker now wants to see Sir Humphrey right away.
Jim Hacker asks Sir Humphrey to find out who was the responsible official. This information will surely be in the files, because everything is always minuted in the Civil Service. Finally, Sir Humphrey confesses that he was the official in question. Jim Hacker plays that he is shocked, and that he wants to help if he didn't have that other worry on his mind: being roasted by the press for disciplining South Derbyshire. Sir Humphrey now proposes to show leniency towards South Derbyshire Council. Jim Hacker is very pleased but only wants to know how he can explain the missing documents in the file. Then Sir Humphrey hands over a statement to be included with the file. When Jim Hacker wants to know how much they usually will be left to see after this statement, it turns out to be zero documents.
Rating (0-10): 9½